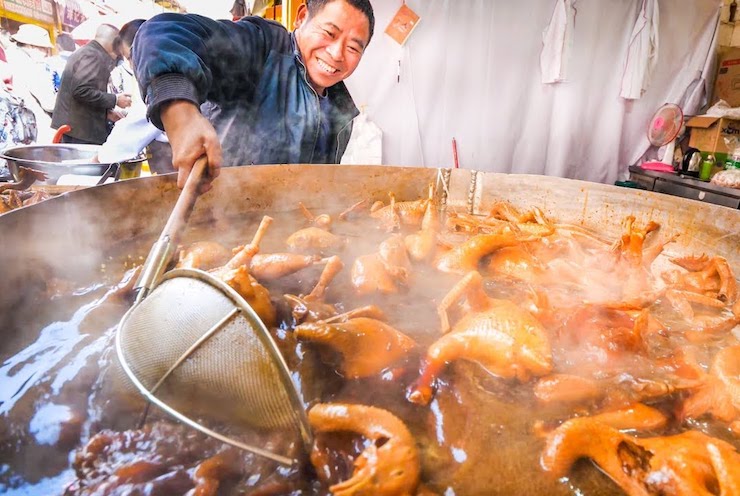 Whether you’re in Hong Kong, Beijing, or any other Chinese city, you must try some of the best Chinese street food around. Some of the most famous dishes are Baozi, Xiaolongbao, liang pi, and Yang rou chuan. You can even try your hand at some of these dishes for a fun trip down memory lane. Regardless of what you’re craving, you’ll be able to find something delicious.

A classic Chinese snack, baozi is a steamed bun filled with a variety of ingredients, such as meat, vegetables, or red bean puree. These tasty snacks are typically eaten for breakfast and are inexpensive and portable. Baozi may be sweet or savoury, or both. Some varieties are filled with beef or barbecue pork. You can find them in a variety of sizes, depending on the filling you want.

Perhaps the best street food in China is Yang rou chuan. Originally from the northwestern province of Xinjiang, this dish is a quintessential Beijing food. It consists of bite-sized pieces of meat and fat, grilled over charcoal and covered with cumin and chili powder. There are several variations of this dish, including vegetarian versions. Here are some tips for trying these dishes:

When deciding which street food in China to try, you might want to try Liang pi. Liang pi literally translates to “cold skin noodles.” It is best served at room temperature, which gives it a bouncy, chewy texture. In addition to the noodles’ texture, they are often topped with cilantro, cucumbers, bean sprouts, and chile oil. Among the many dishes offered by the vendors, Liang pi is an excellent choice for vegetarians and vegans alike.

If you’re looking for the best Chinese street food in the world, you’ve probably heard of stinky tofu. However, the history behind it is more complicated than that. In China, stinky tofu originated from the Qing Dynasty (1644-1911) when a scholar was away from Beijing. In order to earn money, he put tofu in a jar of saltwater, but forgot about it until autumn. When the tofu was finally uncovered and grilled, he was praised by his fellow scholars for the resulting delicacy. Not only did his dish whet his appetite, but it was also a great disease prevention tool.

Xiaochi, or steamed dumplings, are among the most popular Chinese street foods. They are typically sold by vendors in areas with a high volume of foot traffic, such as near temples, markets, and commercial districts. In addition to serving as a light meal between meals, xiaochi are also a popular way to pick up souvenirs. In addition to xiaochi, xiaoye also refers to a late-night snack that can be eaten on the go.

Tanghulu (also called bing tanghulu) is a typical winter snack in northern China. It’s a fruity mixture on a stick, coated with hardened sugar syrup, and a popular snack with children. You can find these treats being sold on every street corner in Beijing, and you can even make them at home! Listed below are a few ways to make tanghulu at home.